When a dividend or stock split occurs, EstateVal and the other EVP Office applications handle it according to IRS regulations. Specifically, the following situations are all accounted for:

For a Date-of-Death or an Alternate Date valuation, if the valuation date is on or after the ex-date, but the dividend is not yet of record, Treasury Regulation § 20.2031-2 (i) states that the amount of the dividend is added to the ex-dividend quotation in determining the fair market value.

The following example demonstrates this adjustment for AT&T, for a June 16, 1992 date of death.

Note that as specified in Treasury Regulation § 20.2032-1 (d), this dividend is not treated as an accrual and hence it is not reported on the Alternate Date valuation.

When the Ex-Date is Between Pricing Dates

If a dividend is of record (the record date is on or prior to the date of death) but not yet paid, the dividend is reported as an accrual. As an accrual, this dividend is also reported on the Alternate Date valuation.

A number of complications can arise in the case of stock splits. The important point to remember is that reported prices adjust when the security begins trading excluding the dividend. It’s at this point that the new shares begin trading.

EstateVal and the other EVP Office applications assume that the number of shares entered are correct as of the date of death and automatically make the following adjustments:

Stock Splits Between the Date-of-Death & the Alternate Date

Where stock splits occur between the Date-of-Death and either the Alternate Date or the Distribution Date, EstateVal adjusts the number of shares and documents the adjustment.

In the following example, Central and Southern West Corp. had a 2-for-1 split. On Monday, 03/09/1992, the reported high and low prices on the new shares where 26.25 and 25.50, respectively. Prior to calculating the inversely weighted mean for a Saturday date of death, EstateVal adjusts the Monday prices to account for the split, given the number of old shares held. 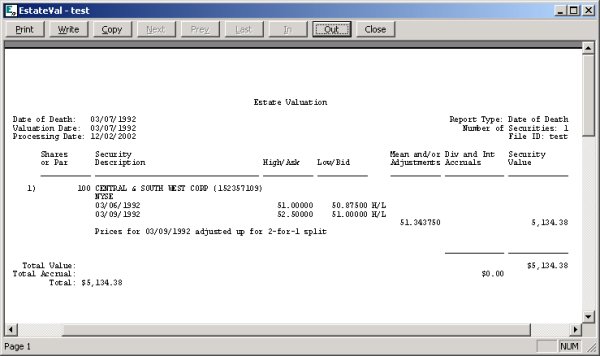 Where both stock splits and dividends are involved, the situation becomes even more complex. In these situations, EstateVal starts with the Date-of-Death inventory and makes adjustments for all possible situations.

Below, the date of death is prior to the December 22 split, and EstateVal reports market prices for the old shares. But it also adjusts the dividend to $0.290 per share to correlate with the Date-of-Death holdings. 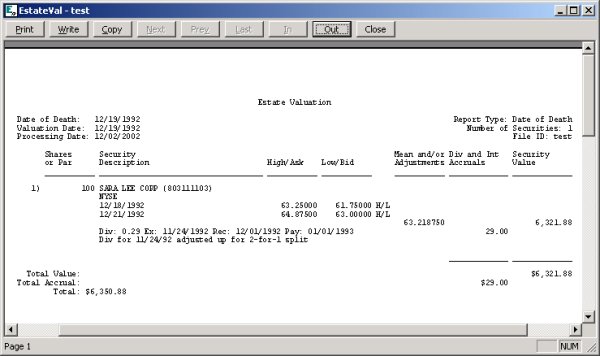 In the example below, the date of death is after a stock split. At this point, the deceased held 200 shares and EstateVal does not adjust the reported dividend. 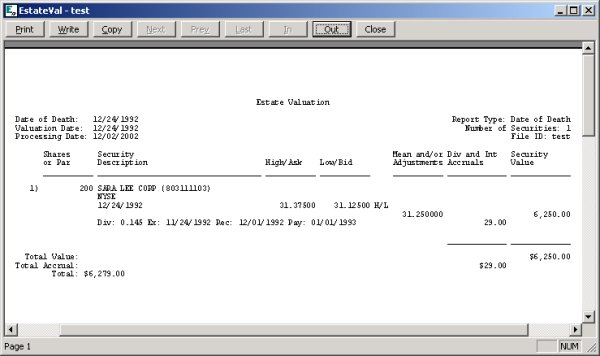 Things You Should Know

EVP Systems: Trusted for over 35 years!

Trusted by thousands of banks, brokerages, and law firms, Estate Valuations & Pricing Systems has been the leading provider of high-quality security evaluations for estate- and gift-tax purposes for over 35 years.